In the autumn of 2014 four members of the church made a pilgrimage/retreat to Iona, staying at the House of Prayer.

The flower team taking a break

Taize service 23rd February at 3.30pm.  A time of quiet reﬂection by candlelight, singing Taize chants, and particularly holding in our thoughts and prayers those suffering from adverse weather conditions.

In September 2013, St Mary’s opened its doors as part of Fife Doors Open Day. Visitors remarked on the peace in the church, as well as its beauty. We hope to take part again next year, 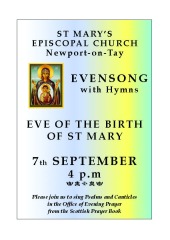